A few weekends ago I went to see my friends Curlew’s Call perform, and I drew a truly horrible sketch of them. It made me think about what I’d post on this blog. I’m happy to share my sketches and art process warts-and-all, but I’ve decided to draw the line at sharing things that make someone else look bad.

In lieu of the drawing that makes my friends look like goblins, here are some other musicians I drew in the last six months. All three are from concerts at Traditions Cafe in Olympia. It’s an intimate, friendly venue where the lights never come all the way down, which is perfect for drawing performers. 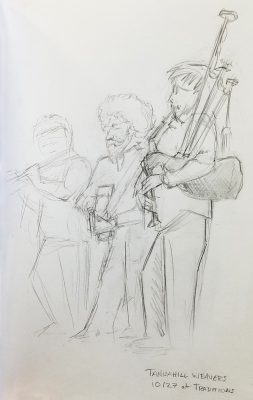 The marvelous Tannahill Weavers have been performing for decades, and they’re always a treat to hear. From front to back, Lorne MacDougall (pipes), Roy Gullane (guitar), Phil Smillie (flute). Fiddler John Martin didn’t make it onto the page. 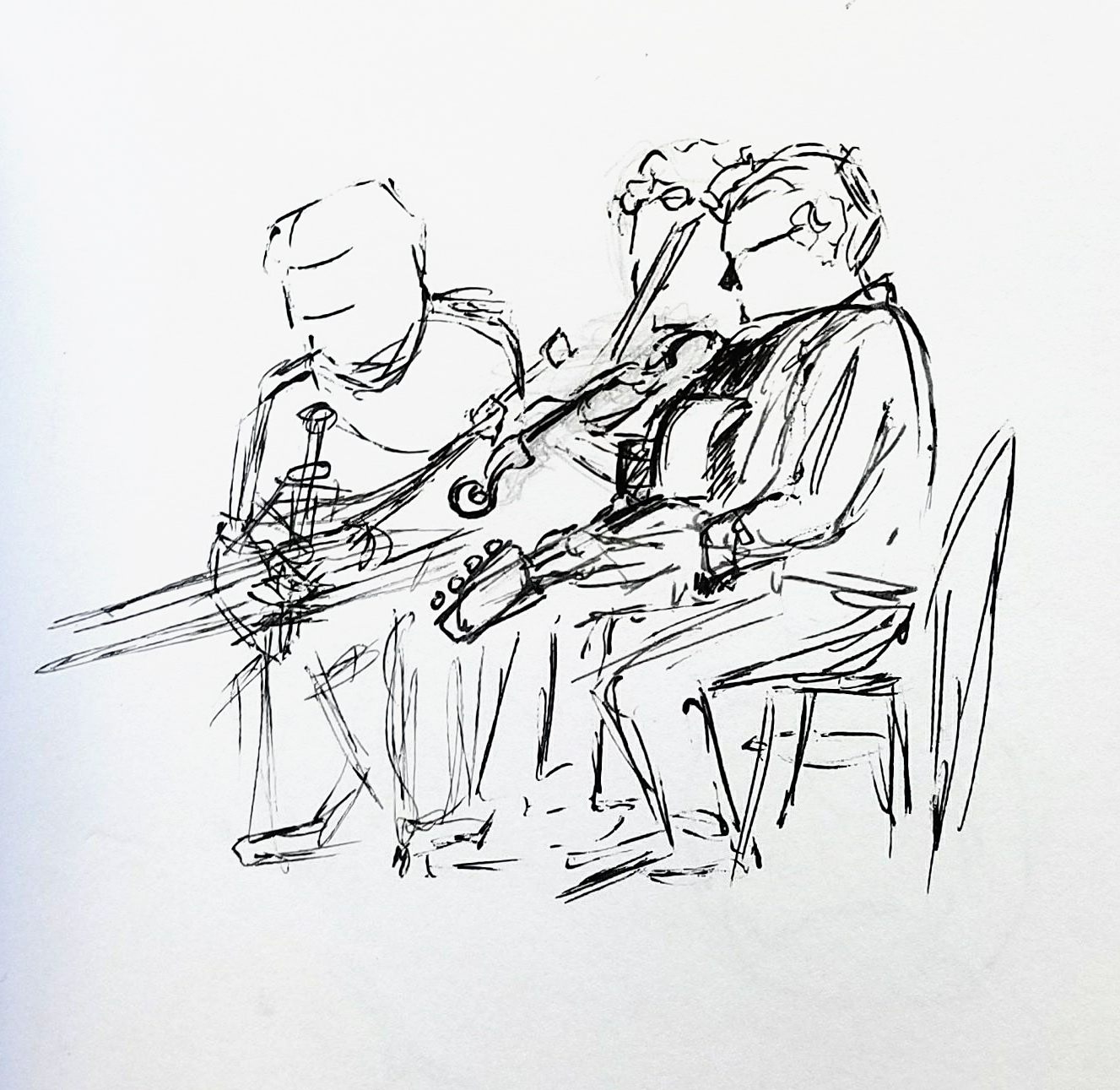 Open The Door For Three is a trio from Chicago. 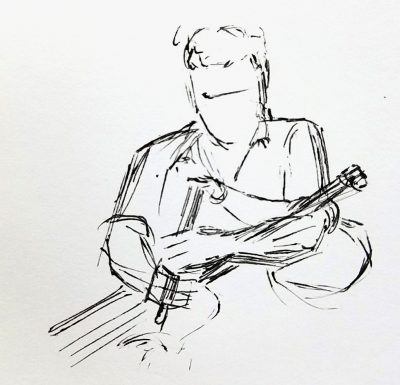 Fiddler Liz Knowles occasionally plays a modern variant on the Norwegian Hardingfele, or hardanger fiddle, which has five playable strings and extra sympathetic strings running under the fingerboard. The confusing jumble in the back is a very vague representation of the uillean pipes, the bagpipe of Ireland (‘uillean’ means ‘elbow’ in Irish, and refers to how the bag is inflated with an elbow bellows rather than a mouthpiece). The uillean pipes are much quieter than the highland pipes. I did another sketch on the opposite page that shows the uillean pipes a bit better. The air bag under the left elbow is filled with a bellows under the right.

I brought crayons instead of pen and pencil to the Derek Gripper concert. Crayons are great for this kind of thing. They’re color without mess or hassle, it doesn’t matter much if you break them, and no one expects anything really good to come from a crayon drawing. It’s very freeing. 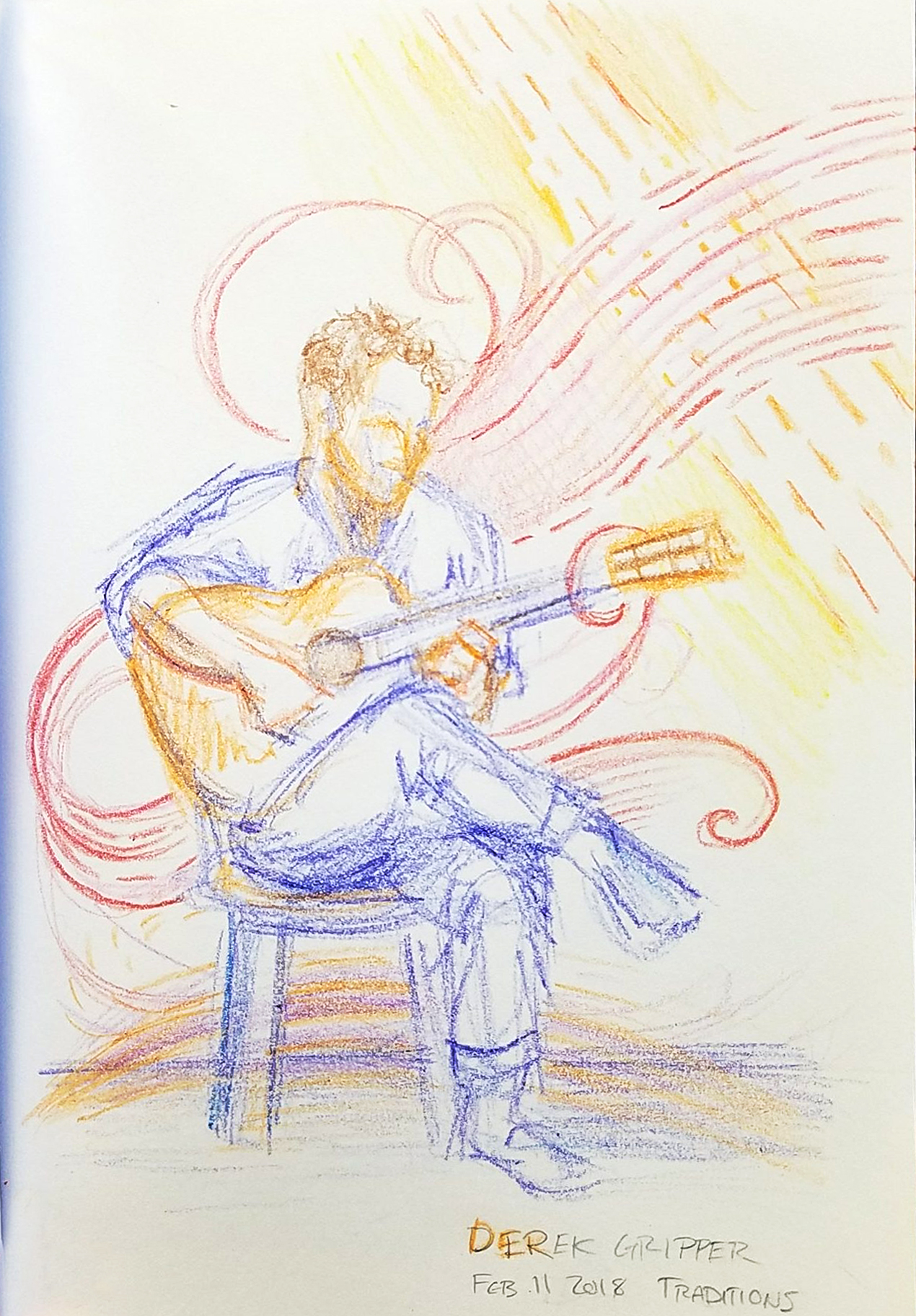 I offered to share my crayons with a ten-year-old friend who was at the show and getting antsy, but she said “I really gave up crayons awhile ago — when I was six.” I told her I’d done the same, but then I’d rediscovered them when I was 32. She gave a world-weary sigh and said “Yeah, that’s exactly what happened, only… only… I’m not thirty yet.” So she passed on the crayons.